Gliding may not be as overhyped as any other extreme sport, but it is an equally exhilarating form of competition. Aside from it being an air sport, gliding is also a unique recreational activity for some people who wanted to experience riding the winds. People can do so much while sailing mid-air, performing tricks and aerobatics as if they’re air benders.

Interestingly, gliding (or, for some people, soaring) does not use any form of artificial power to allow you to climb and zoom, which means that it does not depend on any engine. Pilots use unpowered aircraft called gliders or sailplanes to navigate high-altitude spaces. Using these engineless aircraft, gliding enthusiasts learn to harness natural forces (such as gravity) and begin to move as freely as the wind. Gliders stay in flight and maneuver their sailplane by understanding and harnessing the dynamics of the forces involved in flight. For example, the pilots can gain potential energy from flying through the wind ascending as fast as (or even faster) than the descending glider’s speed. Several forces also help the aircraft climb. They are

Thermals– these are updrafts of warm air.

Ridge Lift– it is a phenomenon where the wind blows against the face of a hill, forcing it to rise.

Wave Lift– these are standing waves in the atmosphere.

These three forces allow the aircraft to propel itself in flight, maintain, and even achieve higher altitudes. The region’s terrain, weather, and climate ultimately determine how high a glider can go, as these influence the above-mentioned forces.

People employ methods to allow the aircraft to take off due to the lack of engines to power the gliders or sailplanes. Launching is the first step in allowing the aircraft to fly, so it must be seamless. Pilots should carefully practice gliding using the same launching method, as each technique can be different from the other.

Aerotowing– in this method, a powered aircraft carries the glider using a tow rope. When the tow plane achieves the ideal height, the glider may release the attached tow rope on his end and begin gliding.

Auto-tow – using this method, a hard surface, and a powerful vehicle are attached to the glider with a long steel cable. When the car accelerates, it forces the glider to rise rapidly to the point where the glider may disconnect the cable.

Bungee Launch– this launching method requires a substantial multi-stranded rubber band or ‘bungee’ to assist the glider launching atop a slightly sloping hill into a strong breeze of rising air.

Gravity Launch– this method only requires gravity, in which the glider pushes down a slope and waits for the gravity to give it enough speed to take off.

The air sport can credit its origins to the genius of the German Otto Lilienthal (1848–1896), who was the first person to achieve predictable and controlled flight using gliders. Further developments on the sport involve the British pilot Percy Pilcher (1866–1899) and the Americans Octave Chanute and the Wright brothers.

After World War I, the Germans developed the sailplanes (the engineless aircraft used in the sport) as a loophole to the Treaty of Versailles that prevented them from developing powered airplanes. They were also the first to utilize gliders and turn them into a sport in 1910. By 1922, the sport reached an international audience, and competitions began in the same year. The sport became prominent in Europe and the United States during the 1930s, not more than a decade.

The Fédération Aéronautique Internationale (FAI) became the sport’s governing body in 1937. Several nations such as the US, Britain, and Germany soon utilized gliders at the onset of World War II. By the end of World War II, sports began to soar again, extending their popularity throughout the continents.

Gliding in the Olympics

With its continued rise to popularity in the 1930s, gliding made its way to the 1936 Summer Olympics in Berlin. As a demonstration sport, it carved its path as a full Olympic Sport for the 1940 Games. However, the ensuing second world war halted this momentum and suspended most of the gliding sports events in Europe.

Unfortunately, when the war ended, gliding failed to return to the Olympics. There were two significant reasons. The first is due to a shortage of sailplanes. The other one is due to the disagreement on a single glider model to use in the competition. Despite the FAI’s constant pitching to reintroduce air sports to the Olympics, it failed to convince the big bosses because the sport lacked enough public interest.

This exclusion did not hinder several trained pilots and aeronautics engineers from discontinuing their passion for soaring. They formed clubs and organizations like the Soaring Society of America to manufacture and maintain gliders. Outside the Olympics, gliding competitions become an arena for gliding enthusiasts to show their aerobatics and flight maneuvering skills. The earliest form of gliding competition involves staying airborne for as long as possible. It led pilots to spend days finishing and winning the contest. By 1939, enthusiasts abandoned form after pilots got themselves killed for falling asleep during said long flights.

Several forms of gliding competition emerged over the years, opening venues for both sexes to showcase their gliding prowess. The World Gliding Championship (WGC) and the European Gliding Championships were the most prominent examples of such competition. These competitions were to test pilots’ ability to harness the dynamics of forces at play and use it to their advantage.

The FAI Gliding Commission holds the WGC every two years. Since air sport is not included in the Olympics, the WGC became the highest level in the air sport. The dates of the events were not necessarily the same because competitions are sometimes held in the summer in the Southern Hemisphere. Currently, the competition involves seven glider classes as recognized by the governing body, FAI. They are

Computer generated 3D illustration with a glider over a landscape

There are several benefits of gliding to health, both emotional and mental, provided below.

Gliders use most of their upper body while they are gliding. The high force of air, as well as the glider, brings out a lot of effort from the arms. Initially, people begin gliding with basic gliders that are easy to control and manage. However, with time, as arm strength improves, a glider can move on to professional and advanced gliders which are a bit difficult to control mid-air. It even requires a lot of load from the arms to keep the glider balanced at all times.

There aren’t many times when a person is able to burn calories as well as have fun but this is surely the case with gliding. As it boosts adrenaline as well as involves physical effort, gliding helps in burning about 230 calories for every hour of gliding. This is suggested on the basis of a 150-pound person. Most people have a gliding session of about 15 to 20 minutes which can burn approximately 60 calories in one go. That sounds like a good deal!

According to experts, gliding is a sport that improves body balance as well. This is because gliding activity targets the postural muscles in the body which include the back muscles, pelvis, and even abdominals. Those who land for the first time have a rough landing and usually have muscular pain in their thighs. In routine landings, there is a constant exercise of thigh muscle which results in improved landings as well. As a result, there is more strength to the bottom as well as the upper part of the body. This provides a significant improvement in body balance as well.

One of the best things about gliding is that it is known to help people with their mental issues. This is because gliding increases the adrenaline rush in the body and gives a surge of excitement as well. The body creates useful chemicals such as endorphins and dopamine which create happy feelings in a person. Besides, flying around in the sky creates a sense of freedom for a person along with an overwhelming view. People really cherish this experience as a memory later on.

Gliding is a sport that helps in overcoming fears as well. Every person who goes out for the first time for gliding is very scared and does not want to do so. This hesitation goes away as a person glides for the first time. With every next attempt, a person can overcome this fear as well as be more confident about it. The mental sense of accomplishment helps a person overcome other fears as well. This is because gliding helps in creating a higher sense of confidence among a person.

A glider sailplane on grass

Sailplane landing on a grass, sunny day in Szczecin.

Safety Issues and Risks of Gliding 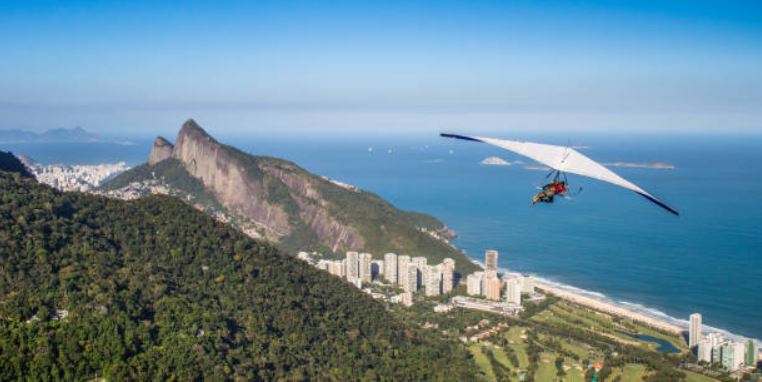 Gliding may be a fun and exciting sport, but it still comes with some possible safety issues. Early hand gliding had a very shaky safety record, so many people still think of a sport as being very risky. Things have improved since then, with advancements in both glider construction and pilot training. As a result, the rates of accidents and injuries have declined.

However, we still need to be aware of the possible hazards that can befall hang gliding enthusiasts. Along with this, one should also know when they have to stop flying due to unfavorable conditions.

Below are some of the main hazards to stay aware of before you go on a hang gliding journey:

Overall, we have to stay aware of the high risks one tales while hang gliding. If we aren’t careful enough about the equipment, flying technique, and other safety precautions, this sort can be very dangerous. The results could be minor injuries or even death. It’s always best to get the right safety gear and gain proper knowledge about gliding before trying it out.

Minor injuries while hang gliding may include:

The more major problems could arise in the form of spinal cord injuries, neck injuries, and traumatic brain injuries. Gliding pilots may also experience damage to their internal organs, torn muscles, and back injuries.

A pilot may also cause damage to property if they land on top of it. They might crash into a car and break its windshield; damage some audio equipment, or even injure another person due to a botched landing.

At the end of the day, it’s very important to take hang gliding seriously no matter what level you’re at. Whether you’re still learning the sport or are an hardcore enthusiast, safety lies in treating this sport with respect and staying prepared in case of any problem.

Gliding is one of the most versatile and adrenaline-rushing sports in the world. It may seem scary but with modern technology, it has become very safe with minimal chances of any accidents. We recommend that you add gliding to your bucket list and have this fun-filled experience at least once in your lifetime.